The song Red Dot, about the old DMK (Dravida Munnetra Kazhagam) flag, which belonged to a failed political movement of pan-Dravidian and/or Tamil nationalism is one that wonders what a Tamil nation state would have meant to Tamil peoples in the modern age.  Aside from a failed civil war for Tamil Eelam in Lanka, there have been no other Tamil nationalist movements that have lasted in the modern day.  Most Tamils living in the Diaspora ascribe their national identity to South Asian nations or to their adoptive homes.  Tamils who live in the Indian subcontinent, the islands of the Indian Ocean or South East Asia similarly identify themselves with pre-markers like Malaysian Tamil or Indian Tamil—the will for a pan-Tamil identity has all been lost.

As an artist of Tamil origin, living in the Diaspora, this identity became more real to me as I navigated my own consciousness and awareness around my identity in America.  The discovery of my late father’s loyalty to the DMK flag and what it represented only furthered the fuel of this fire.  This along with my own sensibilities around the injustices carried out toward my people in Lanka, created within me the imagination of a Tamil state.  It recalled the legend of Kumari Kandam, from which, it is believed Plato may have been inspired for Atlantis.  The lost Tamil continent that sank into the Indian Ocean.  The pseudo historical theories of the Tamil connection to the Mayans, the actual Tamil connections to East Africa and Yemen, and the journey of the Tamil, known as Damo, who established the Shao Lin Temple in China.  I wondered if I was such a global person because my Tamil identity was woven into the fabric of the world.

Then came the National Geographic documentary about the first genes out of Africa and lo and behold, the Tamil DNA marker shared the same markers as the Andamanese, the Papuans, and the Aboriginal peoples of Australia as the first out of Africa.  As I imagined the migration of my people over the water, I thought of my own spiritual connection to the sea and wondered if something deep in the fabric of my genetic make-up inspired my fascination.

Finally, there was the theory of the renowned linguist Susumu Ohno, who put forth the idea in the 1980’s that Japanese (held to be an Altaic language) was overwhelmingly influenced by Tamil, believing the connection to have happened over 2000 years ago in the Yayoi period of Japan.  Ohno was not the first to propose this connection, but as a linguistic scholar of Japanese he was by far the most qualified to make the claim.  Although Ohno is not without his detractors, his theory is backed by an sound argument that picks apart Japanese words and shows the Dravidian linguistic connection, grammatical overlap, relative pronouns, a likeness in word order, striking resemblance in the rhythm of each language and the presence of Tamil influence upon the Yamato kotoba, or words that existed in Japanese prior to the Chinese writing system.

In his book “Seeking the Origins of Japanese Language”, Ohno takes it further by looking at cultural development and influence on ancient Japanese customs such as those connecting with the harvest, religious ritual, and nuptial rites.  While Ohno’s ideas are compelling, they are not backed by sound archeological evidence, and rely on Ohno’s linguistic arguments alone.  As a Tamil, who has had great affinity for Japanese culture, I found his arguments compelling and again they tickled by imagination and I began to wonder, what if there were proof of this connection and influence.

I wrote Red Dot as a fictionalized narrative that begins with the Shogun, Tokugawa Ieyasu sending ships to follow the nautical path of Damo; it flashes forward to Japanese imperial soldiers being slaughtered by a combination of saltwater crocodiles and the British Indian forces in Rangoon during World War II.  In this imagined narrative these Japanese soldiers were coming to rescue their Tamil brethren from British colonial rule.  The narrative also examines the Moorish connection to Tamil, the dead language of Arwi, a combination of Arabic and Tamil, the Moorish bloodlines that mixed with Tamils during the viable and long standing Indian ocean trade.  The East African connection to Tamils both by trade and genetics and finally the little known fact of Tamil coolies who were converted into the Atlantic Middle Passage Slave trade via South Africa, though they only account for a small percentage of that trade having numbered two thousand, that genetic story is also a part of the American Slave Trade epic.  All in all, the song explores all these strands and ends on a black banner, with a red dot, or disc fixed in the middle.  Ironically its similar to the Japanese flag in construction, save for the black taking place of the white, and it imagines a place that has never been allowed to exist by Indian, French, Dutch, British and Sinhala hegemony and that is a pan-Tamil state: 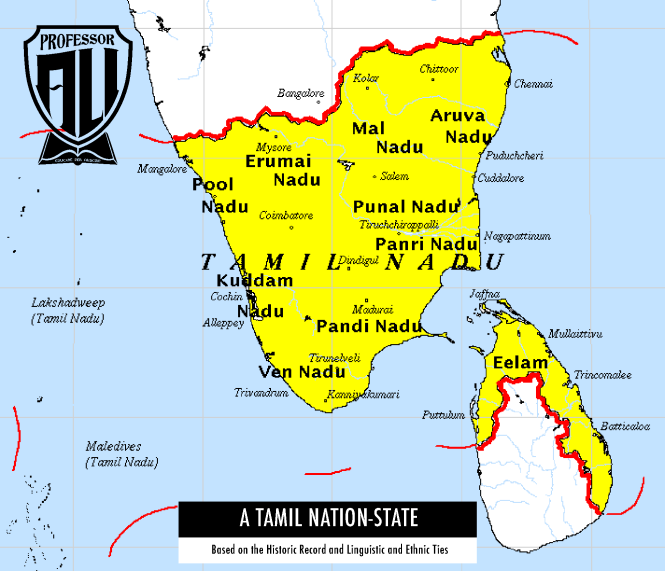 In the world we live in Tamil nationalism is a footnote at best, but Tamil identity is very much alive and vibrant.  Linked to a language and culture that continues to thrive wherever it goes—from Trinidad to Toronto, for Johannesburg to Jaffna and from Malaysia to the Maldives, Tamils continue to have a profound impact. 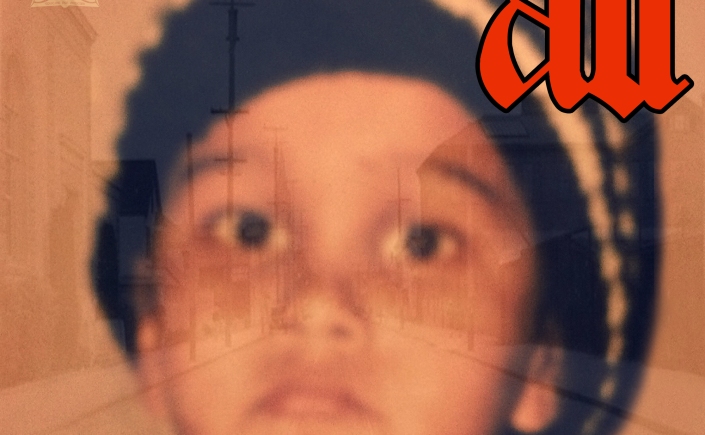 This morning my children awoke, like I did as a child, came downstairs with their sleepy eyes and looked upon the Tamil New Year display with mango, guava and green bananas representing the fruits of our people, betel leaves showing our fortune, turmeric for our health, gold jewelry passed down my family for generations, coins from places we as Tamil people have lived in the Diaspora, next to it is an open copy of the Tirukkural showcasing the spiritual knowledge of our people and a mirror to reflect on our past. Next to the table were gifts for my two children and this year we celebrated the new year of our people by playing Tamilmatic, a piece of art, telling the Tamil story of struggle, sacrifice and survival.

2pac in Tamil explores the impact of the Kavi, or poet on society

Tamilmatic, the album, is in a way, its own display for the Tamil New Year. For example we Tamils great each other on this day by saying “Puthandu Vazthukal!” or “Happy New Year!” and Tamilmatic opens with an introductory track that introduces the album, greeting the listener with a Sanskritic hymn/prayer that is cut short by a the nadaswaram, a Tamil clarinet, and affirmation of the Tamil culture. The rest of the album is like the Tamil New Year display itself. The song Vampire Kiss, talks about the history of the gold jewelry and Red Dot traverses the planet, like the coins on display, and speaks to the Diaspora of our people. The fruits of the album are Saint Thomas, Herstory, and Our Queen, which pay homage to figures from Tamil History who had a profound impact on humanity. Coolie High, Mappila! and Serendipitious showcase our survival and like the turmeric our health and longevity on this planet, in spite of the challenges we faced. 2pac in Tamil, which explores the power of words, of our Mahakavi, or greatest poet, Bharatiyar, and is like the holy text the Tirukkural; and Card Game, which tells the story of our people’s success, despite our hurdles and shows our fortune like the betel leaves in the New Year’s display.

Tamilmatic follows the following three branches of our global journey: the Coolie Slave trade, Post-Colonial migration and a refugee crisis stemming from a brutal war and it finds a way to remain upbeat and positive, like the impact our people have had on this planet. So please celebrate Tamil New Year with us by getting a copy of Tamilmatic on iTunes or Amazon, or streaming it for free on Spotify and through the music, walk the journey made by millions of Tamils. 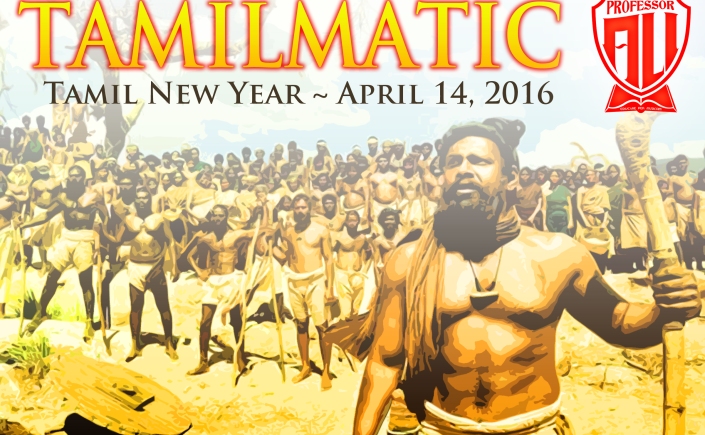 Tamilmatic is the latest album, from Professor A.L.I., a Bay-Area based Hip-Hop artist and educator of Tamil ethnic origin.  “This is a Hip-Hop album that tells the Tamil story of Diaspora & [our] post-colonial survival, [it] captures lost narratives and showcases the Tamil spirit; in both English and Tamil,” says Professor A.L.I., and was co-produced by the artist using Tamil music samples and as a result is a true example of cultural syncretism.

The album also explores themes related to the Tamil experience such as the Coolie-slave-labor system, the multi-layered Tamil Diaspora, the Mappila Rebellions in Malabar, Tamil-Moorish contact and connection, the Tamil separatist movement in India and the war for Tamil independence for a Tamil Eelam in Ceylon.

The beats on the album were co-produced by frequent Professor A.L.I. collaborator: Blue Jones.  The album was mixed by D. M. Adams and was mastered by Glenn Schick.  Tamilmatic is a testament to the adaptability and Tamil people, who have been flung far and wide from being wage laborers and indentured servants in the Middle East, to woven into the fabric of the Maldives, East and South Africa, to their historical importance in Laos and Malaysia, to having linguistic and political influence in Singapore, India and Ceylon, and finally by having a multi-faceted impact on the West through burgeoning Tamil populations in Norway, Germany, Australia, London, Toronto and the United States.

Stay tuned to this page for exclusive videos as we get closer to Tamil New Year and the release of Tamilmatic.

He is an educator wearing a teacher's cap and an M.C. with donning the Kangol; he is both a scholar and an artist. These are his reflections.